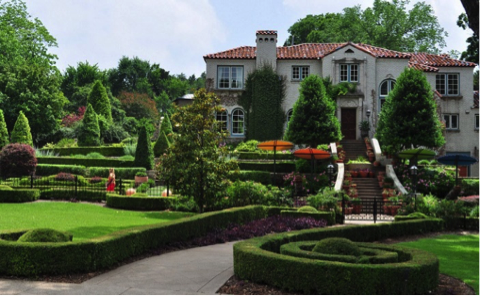 Known as Kessler Park, the KNU neighborhood is a conservation district comprised of 10 separate developments dating from 1923 to 1979. Seven of these are named in honor of George Edward Kessler, a pioneering urban planner and landscape architect hired by the city in 1909. He drafted the Kessler Plan for Dallas with civic improvements designed to solve many of the city’s problems such as flooding, dangerous railroad crossings, and beautification of urban areas by incorporating greenbelts. Although never fully implemented, the Kessler Plan influenced residential development in Oak Cliff and other parts of Dallas.

The lots in Kessler Square are small and regularly gridded; the houses are masonry bungalows of revival architectural styles, predominantly Tudor Revival and Colonial Revival. The second addition, known as the Kessler Highlands Addition, was filed on November 30, 1923, by J.B. Salmon, president of the Kessler Highlands Development Company. This subdivision, east of Kessler Square, consists of long, rectangular blocks that run east-west, including Salmon, Thomasson, Stewart and Kidd Springs. Like Kessler Square, this addition consists of masonry revival architecture bungalows on small, regularly platted lots.

The third phase of the district’s development occurred in 1924 when R.H. Stewart conveyed a tract of land to the North Texas Trust Company, presided by E.S. Owens. On April 19, 1924, the company filed a plat for the Kessler Park Addition, which was immediately north of Kessler Square. This addition was irregularly shaped with large lots on each side of the circular Canterbury Court. On August 23, 1924, the same company filed for the fourth addition, also called Kessler Park. This added an 11-block area of winding and circular streets in the northwest corner of the district.

These first four developments plus the Stevens Park Golf Course were listed on the National Register of Historic Places on June 17, 1994, as the Kessler Park Historic District. The Texas Historical Commission was responsible for the research and nomination, noting that the “district is a remarkably intact residential area in Oak Cliff’s most architecturally significant neighborhood.”

The Kessler Park Historic District retains a high degree of architectural and design integrity, and is an interesting experiment in the democracy of design. The historic buildings have been well-maintained and preserved, and display many examples of Tudor Revival, Colonial Revival and Spanish Colonial Revival architecture. Earlier additions featured modest dwellings and were later juxtaposed with lavish mansions. The district demonstrates an evolution of design, attributed to the ideas and vision espoused by George Kessler.

By the mid 1950’s, an area owned by automobile dealer Earl Hayes was platted, just south of Colorado along Kidd Springs Creek. This area is known as Kessler Lake. The Hayes home, which cantilevers over a private lake, and many others are of the Mid-Century Modern style. Later homes are interpretations of traditional styles.

Timbergrove Circle was developed in 1960 by former Kessler resident and Dallas Mayor Robert Folsom. Homes were constructed primarily in the Contemporary style, as well as houses in the Ranch style with more emphasis on the vertical structure. Timbergrove Circle is one of the more secluded streets in KNU. The proximity of Stevens Park golf course provides many of these homes with additional green space.

The final sections built were Kessler Court (1974) and Middlebrook Place (1979), both townhome developments. On May 25, 2005, the Kessler Park Conservation District was established through the efforts of the neighborhood and the City Planning Department, and with the unanimous approval of the Dallas City Council. This District includes all of KNU’s sections except for Kessler Lake and the two townhome developments.

The area served by KNU has remained historically sound. This is a testament to the collective spirit, pride and TLC shared by past and present homeowners. As new residents integrate into the community and embrace the legacy of this beloved neighborhood, we look forward to a bright future.